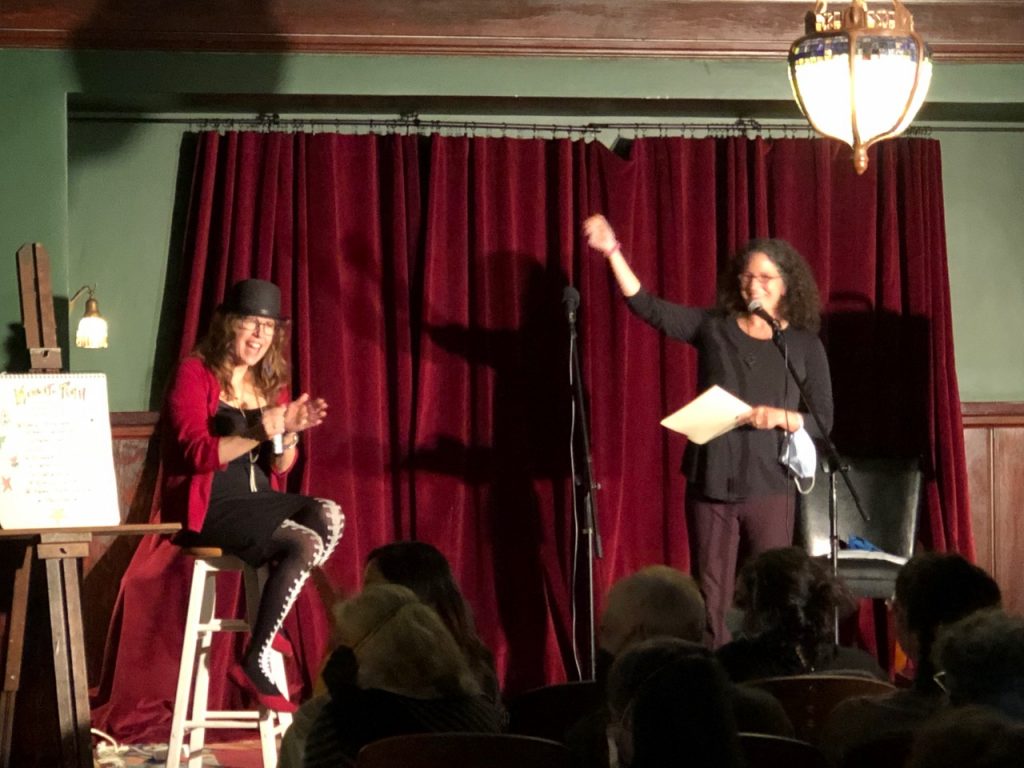 On May 26th, Seattle's Share Baillie Bed & Breakfast hosted The Interstitium: The Moment of Truth. There was a collection of 8 storytellers, all so graciously willing to share their stories. However, before the event began, Dr. Sam Blackman facilitated two The Moment of Truth: Storytelling Workshops. Dr. Blackman is a Moth Grand Slam winner, pediatric oncologist, cancer drug developer, and so much more. The first storytelling workshop was held in person in Seattle on May 7th, while the second was held on May 21st online. The goal was to teach people how to tell or build a story in a way that "finds its most authentic thread". Below is Dena Brownstein's experience of The Interstitium: The Moment of Truth, through her eyes as a storyteller. Beneath her piece, you can find her bio to learn more about our storyteller extraordinaire!

By the time that I stepped away from my 35-year career, I could stand up in front of a 300 person audience, jitter-free. As an ED attending in an academic medical center, I’d had plenty of practice crafting and delivering lectures. Still, climbing onto a tiny, poorly lit stage in the parlor of a turn-of-the-20th century mansion, no podium between me and the forty or so Seattle Interstitium audience members and no PowerPoint, I almost clutched. This was so intimate. This was my story.

I’d first learned about the discipline of narrative medicine from another physician at a women’s writing retreat. This was my second round as an Interstitium  story-teller and, though nervous, I was excited to perform. My 3,000 word essay, “Amazonia”, had just been published in the Spring 2022 edition of Intima, A Journal of Narrative Medicine, my first non-academic publication! Condensing that narrative into a coherent story had been daunting  ̶  ten minutes to recount a harrowing nine-month journey that began when I picked up a voicemail at an airport luggage carousel, and ended when I emerged from the labyrinth of cancer diagnosis and treatment to “reclaim my uncertain life”.

I hadn’t memorized anything longer than a grocery list since finishing med school, but decided to go full on Moth and deliver my piece without a script. Risking being pegged by passers-by as delusional, I practiced out loud on long solo walks until I had it nailed. Standing at the mic, I knew that if I could make it through the first few sentences, I’d be good.  Setting my gaze mid-distance, on no one in particular, I delivered my opening gambit, “I found out that I had cancer in the San Antonio airport.” The story swept me along.

I was glad that I was first on, so that I could really listen to the other story tellers. There was a nurse whose tone shifted from humorous to ominous to celebratory as she described growing up in rural Texas, weaving an incremental reveal of her transition from a football playing, pick-up driving not-quite-bro’ into the fabulous woman who’d been waiting to emerge. A well-published family practitioner shared a beautifully crafted, quiet vignette about navigating the strange territory of divorce, the stuttering process of healing to reclaim her physical space as well as her capacity for joy.  An ED chief resident, whose prior story-telling had been limited to rounds, delivered a heartbreaking portrait of learning one’s craft under the extraordinary conditions of the pandemic.

So many stories. Such generosity. What great fortune to have wandered into this capacious intersection of healthcare and humanity. Launching our stories into the world and sharing our tender, funny or devastated bits adds dimension to our experience as givers and receivers of care. It helps us to stay whole.

Dena Brownstein is a pediatric emergency physician who retired into the pandemic in January 2020. It took two years, but she has finally learned how to relax. Dena’s days are just full enough with friends, family, yoga, hiking, biking, weeding, volunteer gigs, and political action to save democracy. She now has the luxury of time to read broadly and, on occasion, to write.

May 12, 2021
This is the first in a series of discussions with health professionals who use narrative medicine in their work. Together we hope to answer the...