The Art of Vulnerability 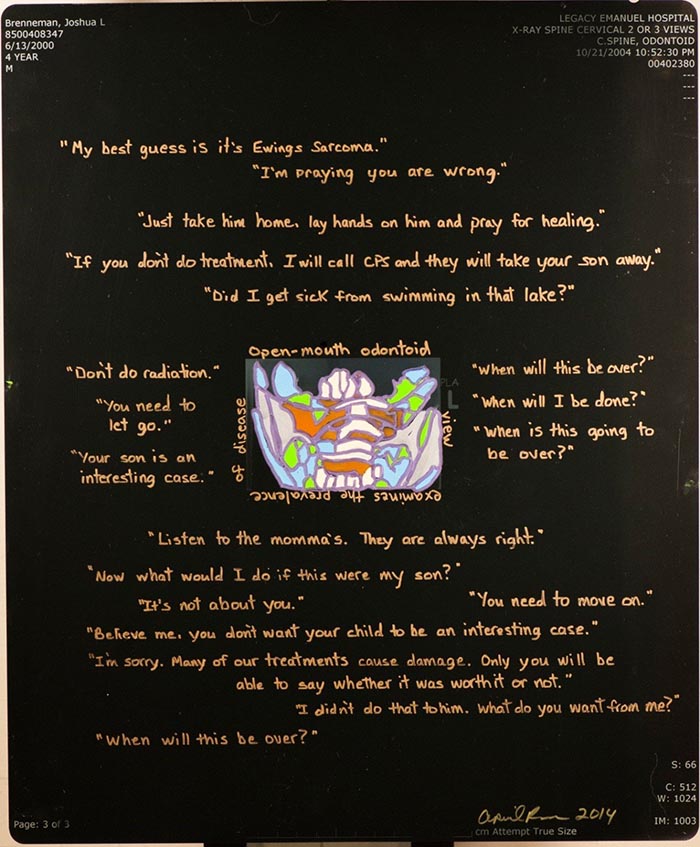 The Art of Vulnerability

When I heard the words “round, blue-cell, and sarcoma” in the same sentence with my four-year-old son’s name (Joshua); all I could manage was three violent kicks to the wall by the surgery waiting room while tears flowed. As treatment started and trudged forward, I fell into an overwhelming cycle of shock, denial, hyper-vigilance, Post Traumatic Stress, fear, and anger.

I was lost. I was voiceless. I was obsessed with finding answers.

Author and scholar, Brene’ Brown says, “Vulnerability is the birthplace of innovation, creativity and change.” Though I was unaware, I had embarked upon a journey of vulnerability at the precise moment of Josh’s diagnosis of Ewings Sarcoma. Eleven years later, I marvel at the organic evolution of my attempt to break free from darkness, to open myself and try to understand and start to make meaning out of my son’s cancer.

The trauma of childhood cancer and its chronic physical and emotional issues of survivorship compelled me to write and blog. It started as a tool to disseminate information about Josh’s wellbeing, but quickly grew to include my emotional and spiritual struggles as his mother. Writing helped me process and try to make sense out of the suffering. After the crisis of treatment was over and we entered the phase of chronic care, I re-discovered the therapy of hiking in the glorious Pacific Northwest. The balm of nature’s beauty soothed me as nothing else could.

Then nine year after diagnosis, I was led to create a visual voice by painting and writing on Josh’s x-rays. Out of fear, I’d hoarded his scans and films in a kitchen drawer. One day, I drew them out and began to experiment with paints and pens.

With words and color, I painstakingly disassembled my previous assumptions about life, illness, spirituality and somewhere along the way stumbled upon resilience.

My pieces start with the greyness of grief and end with vibrant color. The following two images demonstrate this progression. Through this creative exposure, I began to know myself in a deeper way and was surprised by my ongoing transformation. I did not discover the answers I was searching for, instead I learned to accept our story and embrace our journey.

My art show--“Mother & Son: A Mother’s Journey through Childhood Cancer with Her Son” was displayed on May 14, 2014 at an art opening in Tiny’s Coffee Shop in Portland, Oregon where they hung for one month.

I can only describe that evening as empowering vulnerability.

My friend, Lauren, bravely visited my opening, despite her pain from the loss of her nine year old son, Gage. Our sons had played in the pediatric oncology clinic together riding their IV poles down the hospital hallway. We connected as mothers of boys who were fighting to maintain their childhood.  Gage’s death impacted many. Today, Lauren and I honor our divergent journeys and hold space for each other.

The night of my art opening, Lauren mentioned the words “Narrative Medicine” and I began to investigate its significance.

Connecting writing and art with the medical world is powerful. As human beings we all share stories of illness, caretaking and healing. I collaborate with like-minded physicians and health care professionals whose passion of the arts intersects their medical practices. We honor our stories and hear and value each other. I have a voice among professionals, patients, and caretakers.

By modeling these healing practices of writing and art; I am encouraging others to do the same.

Together the Northwest Narrative Medicine Collaborative committee members and I widen our lens exposing and inviting the community to participate and join us at our first annual conference this September 16-18th, 2016. Whether patient, physician, healthcare professional, caregiver or family, all are welcome.

This rare x-ray view was taken through my son’s open mouth. It’s used to check for neck stability and was taken on the day his tumor was discovered. Words begin as thought and are emitted from our mouths. Words embody emotion and power in us, around us and to others. The words on this film were spoken to me by family members, physicians, strangers and my son. They seemed to rattle around in my mind until this film became their container.

As I painted more pieces, I sensed an unburdening. Here, I was dominated by a memory of introducing my healthy infant son to a friend who took him in his arms, lifted him high in the air and proclaimed:  “He’s the Golden Boy!” I moved toward acceptance of what had happened to him as I acknowledged that though physically altered, my son’s Essence/Core were intact.

May 12, 2021
This is the first in a series of discussions with health professionals who use narrative medicine in their work. Together we hope to answer the...