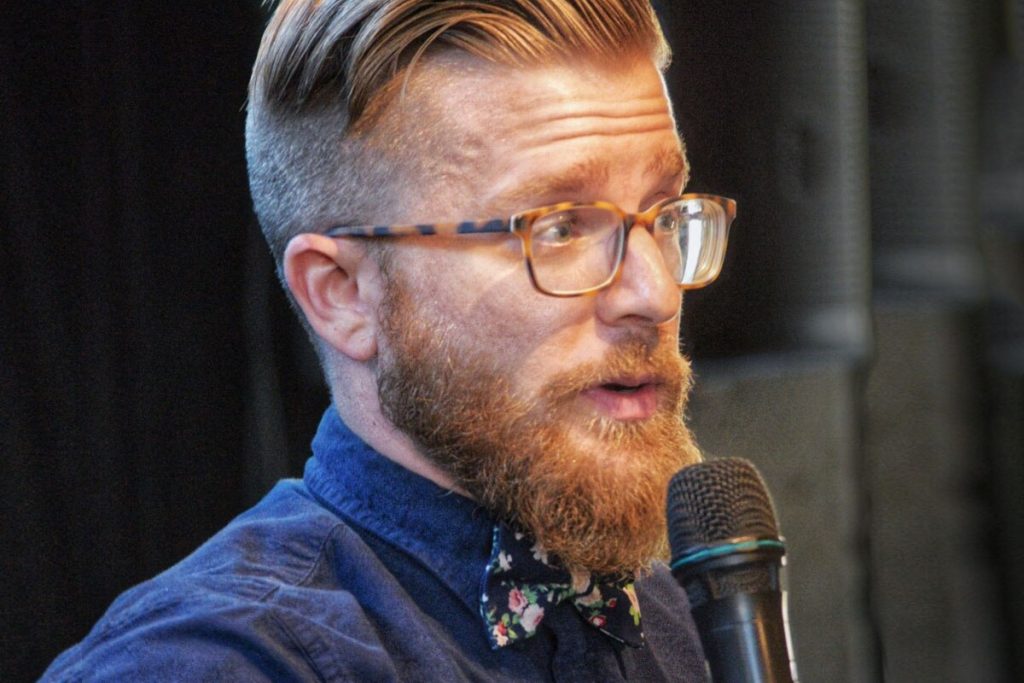 "It’s very easy to give in to the temptation to shock people. My goal is not for the audience to feel shocked. It’s to feel connection.”

Ben Colburn knows a storytelling event geared toward the medical profession can easily get gory.

With the Interstitium, Colburn, a third-year family medicine resident at Oregon Health & Science University, invites his peers—from surgeons on down to hospital custodians, and even some patients—to get onstage and share their experiences within the health care industry. But don't expect to hear a lot about botched surgeries or the sudden expulsion of body fluids.

"In health care, everybody has dramatic stories to tell, because we see intense things, and it's very easy to give in to the temptation to shock people. I really try to steer clear of that," says Colburn, 31. "My goal is not for the audience to feel shocked. It's to feel connection."

Colburn got the idea for what he describes as "The Moth but more medicine-y" from a similar event in San Francisco. But while that event mostly features "doctors primarily performing for doctors," the aim of the Interstitium is to bridge the divide between patients and providers—while also allowing those in his field a place to vent.

"I really find it quite rewarding to help people from wherever it is they're coming from," says Colburn, who in addition to curating the event also serves as a "story coach" for speakers, "whether it's nurse practitioners who are tired of being shit on by doctors, or patients who feel like doctors never listen."

With the third iteration of the Interstitium approaching—appropriate for the holidays, this month's theme is "I Have Good News"—WW spoke to Colburn about audience expectations, finding humor in the story of a miscarriage, and how hearing from doctors isn't a priority.

WW: It seems like a storytelling event specifically for members of the health care industry would have a more pronounced cathartic quality than similar events. Have you found that to be true so far?

Ben Colburn: There's a few different types of people who come to me and have a story to perform. Sometimes it's people who have a story where they feel like, "If you only knew what my job actually entailed, it would blow your socks off." And embedded in that is the desire for catharsis. As somebody who's in residency training as an intern, going through hospital rotations where you're working 80 hours a week and helping people navigate the most intense experiences, including death, sometimes you just want to talk about it as a human being and feel your feelings, and there's not always a great way to do that.

What's a story that really struck you?
One of the people who was really interested in performing at our first show was a front-office scheduler at my clinic. He used to be an operating room janitor. The story he wanted to tell was about cleaning up after a trauma code where somebody had died, then realizing that in the room right next door, there was a family grieving over the body. He was able to reflect back on growing up with a mom who worked as a hospice nurse and his early experiences getting to watch her support patients who were struggling and normalize the experience of death. It was a totally unexpected turn for his story to take. It ended up going from an almost typical TV show drama story and made it intensely personal and intimate.

Is there any space for humor in these stories?
Somebody who performed at our first show told a story that could have been incredibly traumatic. It was about a series of miscarriages, and how that played into her longing to be a mom, which sounds very dramatic and Lifetime Movie-esque. Instead, it turned into a comedic piece. She realized she needed to grieve the loss of the pregnancies she couldn't carry to term, so she tried to build a rock garden in her apartment complex, with a stone for each child. But in the process, she ended up running into issues with her HOA, and her child who's 3 years old running around and telling everybody they're building a "dead baby garden." It was a hilarious story that touched on an incredibly intense subject in a lighthearted and beautiful way.

You've mentioned you try to de-emphasize the voice of doctors at your event. Why?
I feel like it's challenging because, on the one hand, I know firsthand how traumatic it can be to be a doctor, and how meaningful it can be to have space to tell your story. But my role is to use the power, privilege and resources I have to advocate for the wellbeing of the community I care for. Doctors, in particular, already have so much power and privilege accorded to us. All of us would say our role is to lift up the voices of people who don't get to speak. Why should this event be any different in the exam room?

What do you hope the audience gets from this?
I think part of the appeal is getting the chance for non-health care professionals to be a voyeur and hear what it's like to live in that world, to wake up knowing going to work means walking into an unpredictable and intense world that is never the same two days in a row. But more than anything, it's a chance to witness those in-between moments that transcend any particular diagnosis or work day, that remind all of us that at the end of the day, medicine is really just about humans trying to meet and figure out how to thrive wherever you're at.