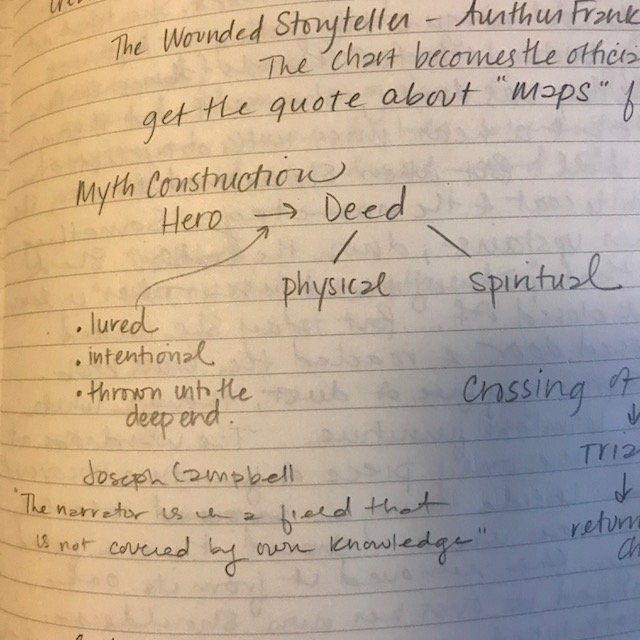 Katy Liljeholm skillfully led the workshop, Creation Myths as Metaphor for Mundane Magic. Ms. Liljeholm is a former Artistic Director of Well Arts and current oral historian for palliative care patients at Legacy Health Services. She immediately brought the group together and engaged us with her warm presence. She began the hands-on workshop with a refresher on different types of myths, placing an emphasis on creation myths. She reminded us of what Joseph Campbell once said about myth: the narrator, the artist, the one thinking up the story, is in a field that is not covered by our own knowledge.

Ms. Liljeholm provided the group with three printed myths. We read them aloud, letting the characters, worlds, deeds, and transformations come alive in the room. Each was very different. Together we discussed what stood out to each of us and why. For some a myth was violent, while for others it was hopeful. For some a myth was magic, while for others it was a true representation of life in our world. Some of us were more attached to one myth than the others. Through the act of closely reading different texts together, our small group undulated over the words and worlds as if riding a wave in the same boat. We experienced the texts in community, and in the process acknowledged and appreciated different perspectives.

Then it was time to write. Ms. Liljeholm provided us with a long list of prompts. Here are a few examples.

At first I struggled with the task. I don’t think of myself as a myth writer, or someone who creates worlds that don’t exist. So I jotted down ideas, wishes, words, and sketches. When I finally got going, my sentences flowed and I found my character walking through a dark hallway in a forgotten part of a house. She finds a brightly colored coat and when she places it over her shoulders a new world springs into being.

Our room in the Lucky Lab was quiet except for pens and pencils scratching paper. The time went by quickly. When the group stopped collectively writing, Ms. Liljeholm invited us to share our myths with the group. I decided to sit back and listen to others. Wow. It is amazing what people can imagine, create, and get down on paper in 15 minutes. Each myth that was read aloud brought me into another world. In one, a city was divided into different colored sectors and resources were running out. In another, robots destroyed Portland but one benevolent robot became a tool for children in physical therapy. In another world, small animals could talk but also Google for answers. The worlds that people created in order to make sense of a problem were imaginative but concrete, mythical but grounded in reality.

One myth stood out to me. It was the story of a beautiful young woman with long, full, blond hair. You know the kind, fairy tail princess hair. One day she wakes to find her hair is gone. With permission, I excerpt part of the myth here.

"One day when Drusilla rose with the sun to draw water for her bath, she saw reflected in the stream that she was completely bald. Her hands flew to her head, smooth as an egg and just as bare.

In disbelief, she ran to the neighboring farm but the boys playing with sticks in the tall grass barely acknowledged her and their mother scarcely looked up from hoeing a row in the garden.  Without her glorious locks, it was as though Drusilla was invisible, except that she knew that wasn't true. Others revealed that they saw her by the quick, furtive aversion of their eyes. She was still here, but no longer a joy to be seen. She was a thing to be ignored, avoided."

Immediately this story reminded me of patients who lose their hair during medical treatment. When prompted the author said that wasn’t her intent. The seed for this myth was planted in something else. To me this exemplifies the beauty of writing and sharing in community. Her myth creation meant something entirely different to me than it meant to her. And the same could probably be said for others around the table.

Distraught by the loss of her hair and her subsequent invisibility, Drusilla digs a hole and gets in. The natural world overtakes her, and soon she becomes an egg covered with soil, vines, and flowers.

"A little girl chanced upon the wondrous egg under its greenery, her attention captured by the faint sound of tiny cracks in the shell underneath.  As she watched in wonder, the shells and the vines split apart to reveal a shiny black raven. The girl stood agape as it tested its broad wings in the breeze and then looked her straight in the eye with a stare that knew everything she would ever do and be. The raven tilted her head affectionately, nodded, and flew away to the top of a very tall tree on a very big mountain. The little girl ran to tell everyone in the village and although no one believed her, she never forgot.  She became a wise woman, highly sought after for comfort and advice."

I invite you think about what you see, hear, and feel in the final paragraph of this myth. And I invite you to think and write about your own worlds with no rules. I hope you join us on the 3rd Tuesday of every month at the Hawthorne Lucky Lab Brew Pub for the NWNMC Community of Practice. All are welcome.