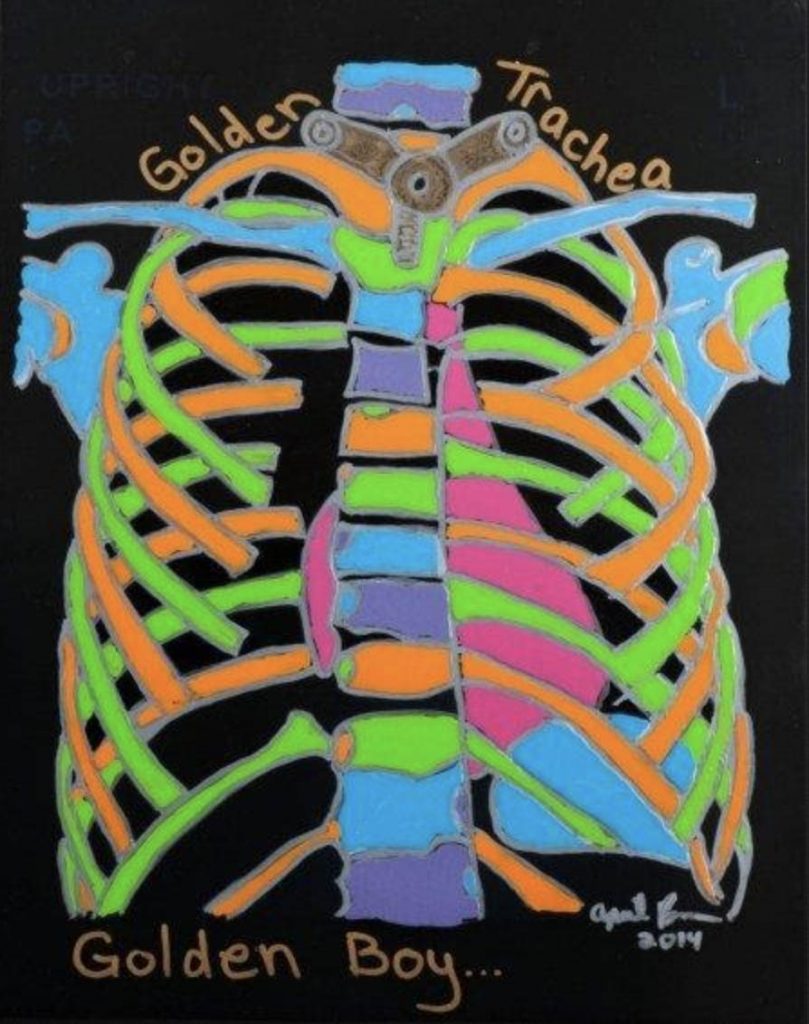 In 2014, April Brenneman googled “Portland Narrative Medicine” and found Elizabeth Lahti, the newly appointed director of narrative medicine at Oregon Health & Science University. April, the mother of a cancer survivor, told Elizabeth the story of how one day she pulled her son’s X-rays from the kitchen drawer and started painting over them, using vibrant colors that she felt represented who her child really was. April used art and writing to understand the experience of her son’s illness, and wanted to know more about narrative medicine. Elizabeth, a physician educator and mother herself, connected with April. Together, they imagined a space where physicians and patients could meet each other as humans, to better understand the multiple perspectives that contribute to the experience of illness and healing. Their group of two soon became a core group of patients, doctors, nurses, researchers, educators, writers, artists, and caregivers, working toward the goal of creating a community to explore the intersection between health, illness, and story. They called the community Northwest Narrative Medicine Collaborative.

In 2016 we hosted our first conference. We were just a bunch of dedicated volunteers, trying to create something—not entirely sure what that something was. Our conference experience was innovative and novel in many ways. It was interprofessional and multi-generational, including students, early, mid, late, and retired clinicians from all health disciplines and backgrounds. The conference intentionally included the often forgotten, but essential members of a health care team—patients, caregivers, and family members. We included artists, writers, musicians, and dancers as both participants and speakers. We created large and small group experiences and invited participants to recognize the multiple hats they wear from any side of the exam table. We partnered with Write Around Portland, and the Portland Art Museum to infuse a health care conference with creativity and new ways of approaching illness and healing. There were opportunities for reflection, creation, and connection woven throughout the weekend.

The something was beginning to crystalize. Participants in the first conference asked “What next? What now?” We developed a monthly series of workshops in Portland, hosted by volunteers with experience facilitating creative workspaces. Our core committee expanded and evolved to meet the growing community. We hosted another conference in 2017, and launched our current Community of Practice. In 2018 we expanded to include like-minded thinkers and leaders from the Seattle area. In 2019 we launched The Interstitium in two cities. The northwest in NWNMC was coming to fruition, including voices from beyond our initial Portland cohort. In 2018, after countless hours imagining and reimagining, Northwest Narrative Medicine Collaborative became an official nonprofit organization. Our interim board became official in January 2019, and our first Board of Directors set to work.

From the beginning, Northwest Narrative Medicine Collaborative has prioritized community and connection, with a goal to flatten the hierarchies of health. Each voice carries the same weight; each role is equally valued. We are committed to evidence-based practice, building on skills learned from our colleagues across the country, with special gratitude to the Columbia University Program in Narrative Medicine, which served as an inspiration to the founders and many of our members. We recognize that not every experience can be measured and quantified, but that does not mean they are not valuable. In fact, some are more valuable because they cannot be measured. At NWNMC, we dwell in ambiguity, embrace uncertainty, and bear witness to the lived experiences of illness in our fellow humans. We believe this work makes us better doctors, nurses, social workers, patients, family members, caregivers, chaplains, scholars, educators, and humans.