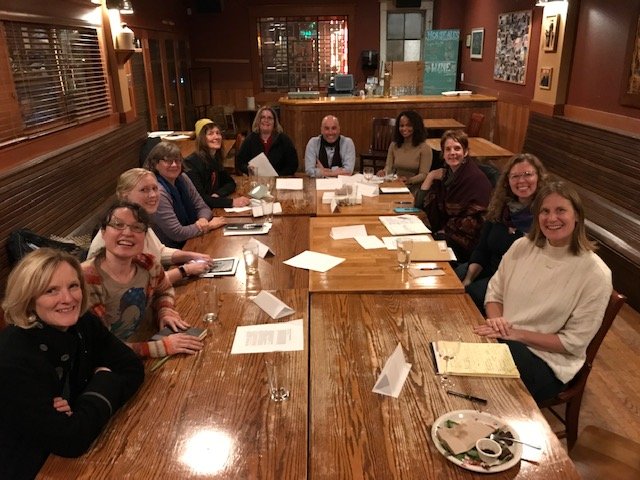 On Tuesday evening we met at the Lucky Labrador Pub where we thought, talked, and wrote about “Place”. Pamela Pierce, an OHSU librarian, skillfully facilitated our time.

We started with "The Clan of One-Breasted Women", the epilogue of a book by Terry Tempest Williams. This short piece hits hard, as the “clan" are all her female relatives, who live downwind from the nuclear test sites in the Utah desert and though they live clean and spiritual lives as LDS folk, they all have breast cancer. Visions of the desert and the land echo through the pages.

What does our sense of place evoke in us? What ties us to a place? What is hidden in a physical place, and how does that get expressed?

Our writing prompt used archival photos in Oregon, from the Library of Congress Prints and Photographs online catalog. Several were by known photographers, like Dorothea Lange, and some had historical context, but several were unknown sources and some had no context. This seemed difficult and initially a bit random to me: but I wrote a back story for the photo I chose, in the voice of a woman in the home, and a pregnancy and the worries of the winter and the year, cued by a cord of wood stacked in front of a house in 1939.

One writer chose a picture of massive logs loaded for rail shipment out of Eastern Oregon: and wrote about the men, the danger and the injuries. She then asked about the invisible women: not counted in the monies or the camps, and spoke of the decimation of the land and the marked difference in gender roles.

A second writer looked at the photo of the cord wood and houses and wrote about the wood from the ruined land, and she spoke as a pregnant women thinking about the gender of her unborn child and also with a focus on the gender roles where a boy will live a life of action outside the house, and a girl will be bound inside and more constrained. It felt like we were handing off thoughts and story without communicating directly about it.

Several other writers  described the thoughts of the people in the pictures, or the glory and beauty of the places.

We expressed frustration about not knowing enough about the photos. Who are they? Where is that? What does that mean? And we now understand that the work of an archival librarian is full of such questions. Pam says it can be very frustrating.

Our summarizing conversations were rich and personal and the time went too fast.

Our next Community of Practice will be held at 6 PM on Tuesday, December 18th, at the Lucky Labrador Pub on Hawthorne. The holidays can be a challenging time emotionally, so our topic is timely! Join Stanford medical student Candice Kim in exploring, "From Burn-out to Well-being: Transforming Empathy into Compassion."

Arrive earlier if you’d like to purchase food and drink.